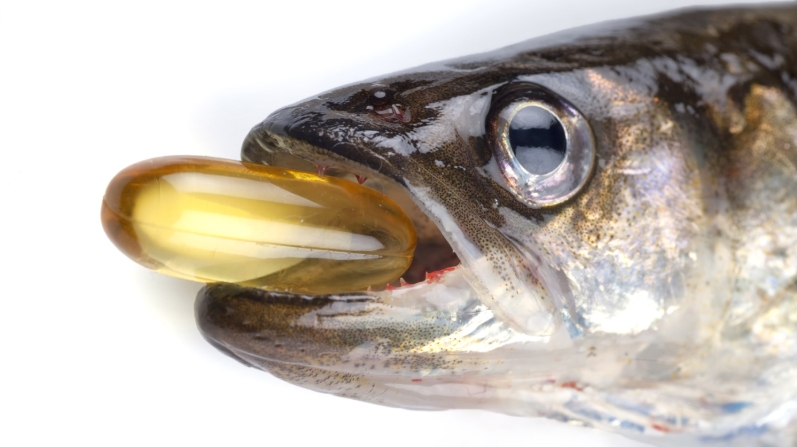 Most of the health benefits of fish oil are because it is one of natures’ richest sources of omega-3 fatty acids like Docosahexaenoic acid (DHA) and Eicosapentaenoic acid (EPA).

While fish oil benefits are numerous there are some false claims on how to use this incredible supplement but in this article we will go over the proven scientific evidence to demonstrate the true benefits of fish oil.

A lot Americans’ health problems can be followed back to having an imbalance of omega-3 and omega-6 fats. Omega-6 fats consumed in large amounts without omega-3’s they cause inflammation, which we know is a precursor for disease.

Studies show the biggest cause of  omega-3 deficiency is eating too much  fried foods, fast foods and processed foods that contain oils like soybean oil, canola oil, cottonseed oil and corn oil.

When you have an omega 3:6 imbalance it can lead to the following health conditions:

1.  ADHD – Studies done by The University of South Australia has determined that a combination of fish oil and evening primrose oil capsules can help reduce common symptoms of ADHD. According to the researchers, “Fish oil is believed to work via its effects on brain function. 60% of the brain is composed of fats, with the most important being polyunsaturated omega-3 and omega-6 fatty acids. These must be obtained through diet and can be found in dark leafy vegetables, walnuts, linseeds and oily fish.”

2.  Anxiety – The European Journal of Neuroscience recently published a study earlier this year showing that fish oil reversed all anxiety-like and depression-like behavior changes induced in rats. The article  says the importance of supplementing with fish oil at “critical periods of brain development.” So it might be a good idea to get your kids on fish oil. There are good brands out there for kids specifically it may help them from getting anxiety or depression when they get older.

3.  Arthritis – A group study discovered that in three groups  (1 taking fish oil, 1 taking borage seed, and 1 taking a combination of the two) “exhibited significant reductions” in disease activity and no therapy outperformed the others.

4.  Alzheimer’s Disease – The essential fatty acids vital for brain function that are found in fish oil can not only slow cognitive decline, it can help prevent bran atrophy in older adults.

5.  Cancer – Fish oil has been found to help kill various cancers including colon, prostate and breast. Not only has research proven that it makes conventional cancer drugs more effective.

6.  Depression – We’ve already seen that fish oil can help with depression like symptoms in rats, but what about people? The journal Nutritional Neuroscience published a study evaluating the effects of fish oil supplementation on prefrontal metabolite concentrations in adolescents with major depressive disorder. There was a 40% decrease in major depression disorder symptoms in addition to marked improvements in amino acid and nutrition content in the brain.

7.  Diabetes – Fish oil helps reduce the risk of diabetics from developing cognitive deficit because it protects the hippocampus cells from destroying.

8.  Eye Disorders – Fish oil has been shown to reverse dry eye, age-related eye disorders like cataracts. Due to the high EPA and DHA levels, it was concluded that people at risk for neovascular AMD should take fish oil supplements.

9.  Cardiovascular Disease (CVD) – According to the Cardiovascular Research Institute in Maastricht in Netherlands, “Epidemiological studies showed that replacing fat by carbohydrate may even be worse and that various polyunsaturated fatty acids (FA) have beneficial rather than detrimental effects on CVD outcome.” This includes, they continue, fish-oil fatty acids with anti-inflammatory properties, which can help prevent and reverse a plethora of cardiovascular diseases.

10.  Immune Compromise – A recent study has shown that when the antioxidant astaxanthin is combined with fish oil, the immune boosting power is multiplied.

Other Health Benefits of Fish Oil

In addition to the above benefits, fish oil also improves skin health, weight loss and fertility.

The health benefits of fish oil can be incredible for the body’s largest organ, the skin. This source of  essential fats improve the health and beauty of human skin in several ways. They nourish the skin with fats and contribute fat soluble vitamins that help skin maintain a smooth, elastic texture. There is also evidence that fish oil prevents wrinkles and work against the aging process.

The deficiency of EPA and DHA in diet contributes to skin conditions such as dandruff, thinning hair, eczema and psoriasis, as well as age spots and sun spots. Without the essential fatty acids, too much moisture leaves the skin.

One of the biggest reasons fish oil leads to healthier skin is because it reduces inflammation.

Recent studies have shown that the consumption of fish oil (or, more specifically, the omega-3 fatty acids found in fish oil) improves fertility in both men and women. DHA, which is a byproduct of omega-3 fatty acids, play a key role in the mobility of sperm and health of sperm in men. Also, fish oil has been found effective in treating conditions like PCOS and endometriosis which can cause infertility.

Fish oil is also extremely beneficial for pregnant women and their children.  The omega-3 fat DHA supports the development of brain, nervous system and eye sight in the infant.  It has also been proven to reduce miscarriages.  Also, a medical study out of Denmark conducted on more than 8,000 women found that consuming more wild caught fish resulted in healthier babies and less premature births.

Personally I like to take orthomolecular or poliquin brand fish oil. You may have to play with the amount but typically my clients like to take two a day.