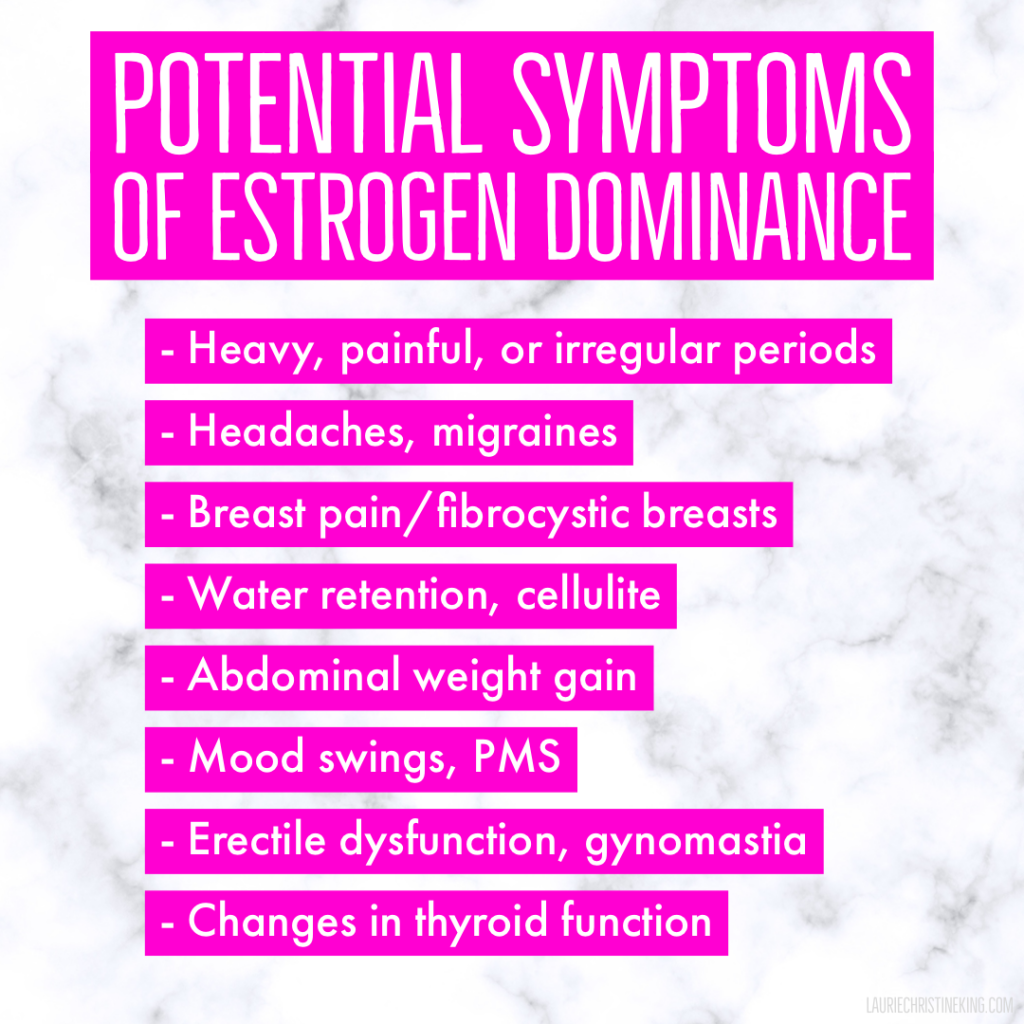 Estrogen dominance is on the rise among men and women. Find out how you can get it under control.

Estrogen dominance has been showing up a LOT lately in the consultation conversations I’ve been having and in my clients’ test results.

It’s a stealthy hormone imbalance that often goes overlooked in typical blood test and can be related to issues such as weight gain, sleepless nights, sugar cravings, low energy, depression and insulin resistance all within both men and women, and irregular periods and intense PMS symptoms for just the ladies.

For this week’s blog, I’m bringing back this topic so you can elevate your knowledge in case estrogen is dominating you…

Stubborn weight, acne, low libido, restless sleep and struggling to build muscle are just some common characteristic when estrogen is dominating your body.  Estrogen doesn’t discriminate. It’s just as much of an issue these days with both men and women.

My husband is a perfect case in point.

For the majority of his adult life, he was able to manage his body weight with the simple calories in versus calories out equation.  When the scale started to tip, he simply cut back on his food intake and exercised more.

That was, until estrogen took control.

The older he got, the harder it became to manage his weight through diet and exercise, and one day it just stopped working all together.  Not only was he not able to lose weight, but one day he stepped on the scale and had actually gained weight despite his efforts to work out harder and monitor his food intake.

For an engineer and scientific-minded guy, this scenario was mind boggling.  He applied the equation of calories in versus calories out and it did not produce the outcome it was supposed to.

There’s a million things I could say about the broken calories in versus calories out equation, but let’s stay focused on estrogen.

There was obviously something more at play keeping my husband from managing his weight, so we set out to run the right type of hormone test and to collect some clues.

Clue #1– A possible genetic predisposition.  A few years ago, his mom had been diagnosed with the estrogen driven type of breast cancer called ER-2. About 80% of all breastcancers are “ER-positive”, meaning the cancercells grow in response to estrogen.

Clue #2– A Dried Urine Test for Comprehensive Hormones (DUTCH) revealed estrogen metabolites (estrone and estradiol) were very high outside the functional range and testosterone was within range.  These values can not be seen on a blood test, so they had been routinely missed.

My husband had a classic case of underlying estrogen dominance that was keeping him from losing weight.

What is estrogen dominance?

In women, it’s commonly evaluated based upon the ratio of estrogen to progesterone, but as with men, it can also be evaluated when comparing testosterone to estrogen.

In general, when estrogen levels are relatively high to other hormones, it’s not good.

I fell victim to estrogen dominance back in the day.  I suffered from periods every other week. I had rapid weight gain no matter how hard I worked out nothing mattered. I ate perfect I had no life bc I always felt bad. I was an emotional roller coaster and no doctors could help. They suggested anti-depressants. It is nothing to joke about it almost killed me.

The good news is that estrogen dominance doesn’t happen overnight. It’s preventable and reversible in almost any case.

But if estrogen gets out of control, it can lead to more health issues beyond stubborn weight, acne and pain in the ass periods.

Estrogen dominance can also contribute to:

So how can you keep estrogen within its normal playing field?

Making sure estrogen doesn’t start dominating the field means tackling it from a couple of different angles.

One of the biggest reasons why estrogen is on the rise is due to a classification of toxins known as Xenoestrogens.  These toxins have the ability to mimic estrogen in the body or block hormone receptor sites resulting in elevated estrogen levels. Common sources of estrogen promoting toxins can be found in:

Aim to swap out your plastic containers for glass or stainless steel and use the EWG’s Skin Deep Databaseto find non-toxic personal care products.

Other estrogen elevating sources also include:

Some actions you can take action to tackle these sources by eating organic, drinking and cooking with only filtered water, properly addressing water leaks and mold and taking time to meditate or de-stress daily.

To sort out the synthetic hormones and/or intestinal pathogens, seek a functional health practitioner (like myself) to assist you with proper and personalized strategies.

The reality is, we can’t control our exposure to estrogen driving toxins 100% of the time.  But our liver does play a major role in getting rid of excess estrogen that might be circulating in the body, and that’s something you can get behind. By supporting liver function, you can kill two birds with one stone: eliminate toxins you’ve been exposed to that might raise estrogen levels, and excrete existing excess estrogen.

To support your liver, you can:

Do all of the above and give more power to your liver!

The great news is, you can combat estrogen on a daily basis with little effort.  Simply aim to eat anti-estrogenic foods, known as cruciferous vegetables, and drink clean, filtered water (from a glass or steel bottle of course!).

Some of the best estrogen regulating foods to consume include:

By taking action from all three angles, estrogen will be neutralized and will play nicely.

However, in some cases even if you’re adamantly working to lower estrogen levels, there still might be something stopping you from getting where you want to be.

My husband was another perfect case of this. Even after months of taking action to reduce estrogen, his levels only moderately decreased.  It certainly wasn’t for lack of effort, but a genetic predisposition became more clear.

Remember, clue number one in his story was his mother’s history of estrogen driven breast cancer.  We were able to correlate his family history clue with his repeated test results to see from a genetic standpoint, his body actually needed more support than most people to keep estrogen under control.

Today I’m happy to report that with the proper diet and lifestyle choices, my husband has lost over 30 pounds.  He easily maintains his weight while taking more days off from exercising than ever before and he is proactively preventing a future battle with estrogen driven cancer.

If you suspect estrogen might be dominating you, and you want to get your hands on the right lab tests and resources to get it under control, then email seefitpt@gmail.com to schedule your free 45 minute consult.